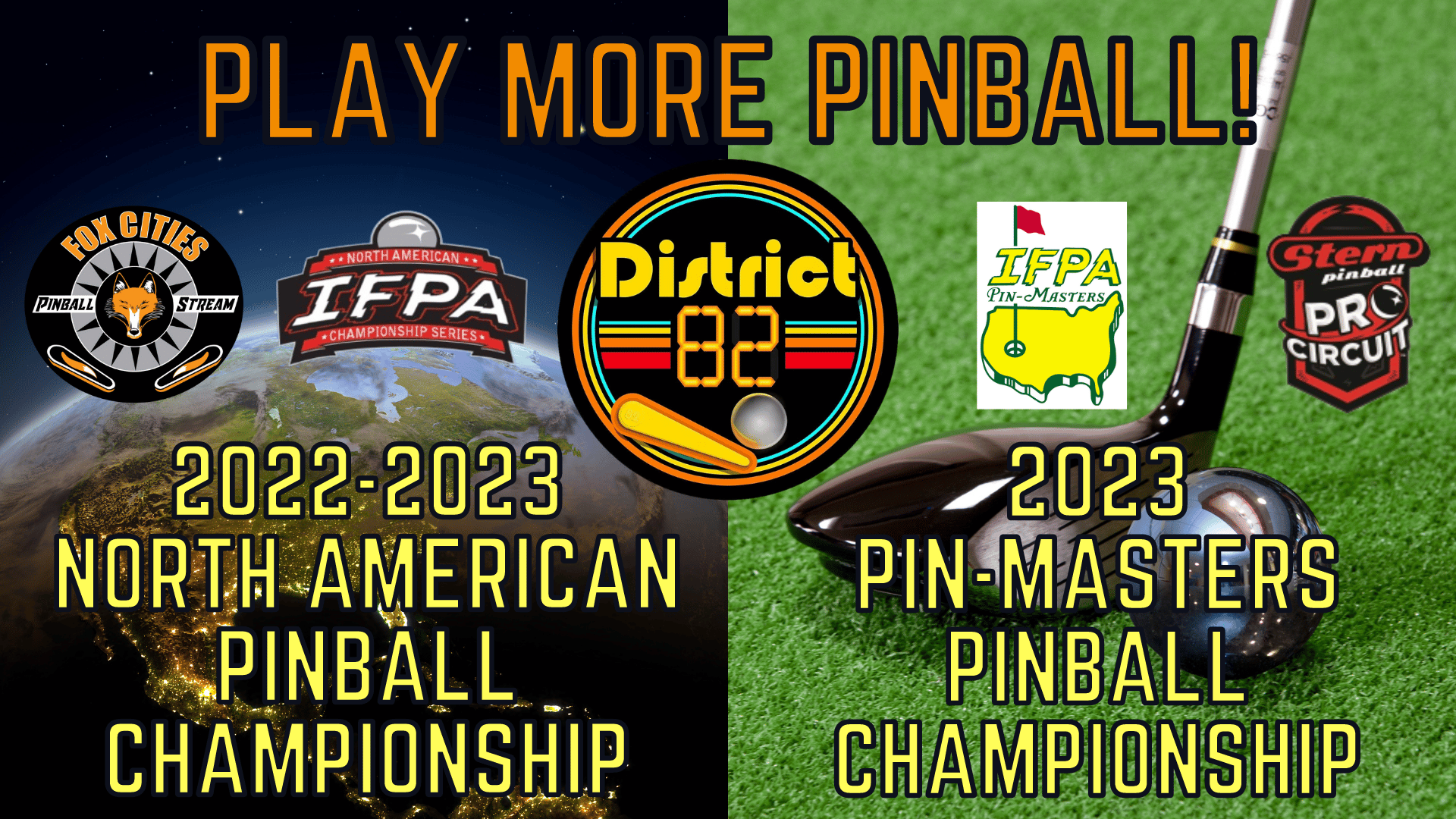 You do not register on the District 82 website for any of the following events. Please follow the instructions under each event for registration.

The NACS and Pin-Masters Tournaments will be broadcast live on Twitch by Fox Cities Pinball Stream.

Cobblestone Hotel & Suites in De Pere is a brand new hotel (building built in 2022) and is offering a corporate rate on hotel rooms for District 82 events. The rooms are all really nice and the hotel is located 2.1 miles from District 82 which is about the closest place. The room rates start at $109 per night. Use this link https://be.synxis.com/?Hotel=37764&Chain=7721&promo=DIST82 or Promo Code DIST82 when booking through them directly.

This is an Open event in which anyone who wants to play in it can register and play. This is also a Stern Pro Circuit Event. The main event is an 18 hole Pin-Golf Course in which the goal is to reach a target score in the fewest number of balls. You will be assigned ‘strokes’ for each ball it takes before you reach the target score. All games will be set to 5 balls. If you do not reach the target score within 5 balls you will receive between 6-10 strokes based on how close you get after the 5 balls are played. You will play 9 holes on Friday & 9 holes on Saturday. Then the top 24 players with the lowest number of strokes combined for the 18 holes will have playoff.

We also have 3 strike classics knockout for all the Pin-Golf participants on Friday Night after the PM Qualifying.

This event is PAID IN ADVANCE

Full details and how to register are at the following link: https://www.ifpapinball.com/tournament_pages/pinmasters/

Lumberjack Johnny’s is an Axe Throwing and Pinball Bar. They will have over 40 pinball machines set on free play for this weekend.

Lumberjack Johnny’s is located in Green Bay, WI about 5 miles from District 82. They will be hosting 3 tournaments in coordination with the North American Pinball Championship and IFPA Pin-Masters. These tournaments are all IFPA approved and have prize money associated with them.

3 Tournaments in Total. Each tournament cost is $25 ($10 Admission + $15 Prize Pool). You sign up for all the tournaments at once through the Lumberjack Johnny’s Website Here: https://www.lumberjackjohnnys.com/wppr-chopper-tournament. They are gauging attendance by you signing up. They realize that 2 of these tournaments overlap the finals of NACS on Thursday and Pin-Masters on Sunday, and not all of you will make it to those tournaments. You will not be expected to pay for the event if you do not show up.

Each Tournament is limited to 150 players

These events are PAID AT THE DOOR and not in advance. Thursday Night and Sunday Tournament will have some players in the National Championship and Finals for Pin-Masters. Signing up for the WPPR Chopper tournaments doesn’t obligate you to pay for them or attend. We are simply gauging projected attendance.

Lumberjack Johnny’s will also be broadcasting the twitch feed from Fox Cities Pinball Stream during all the events this weekend.