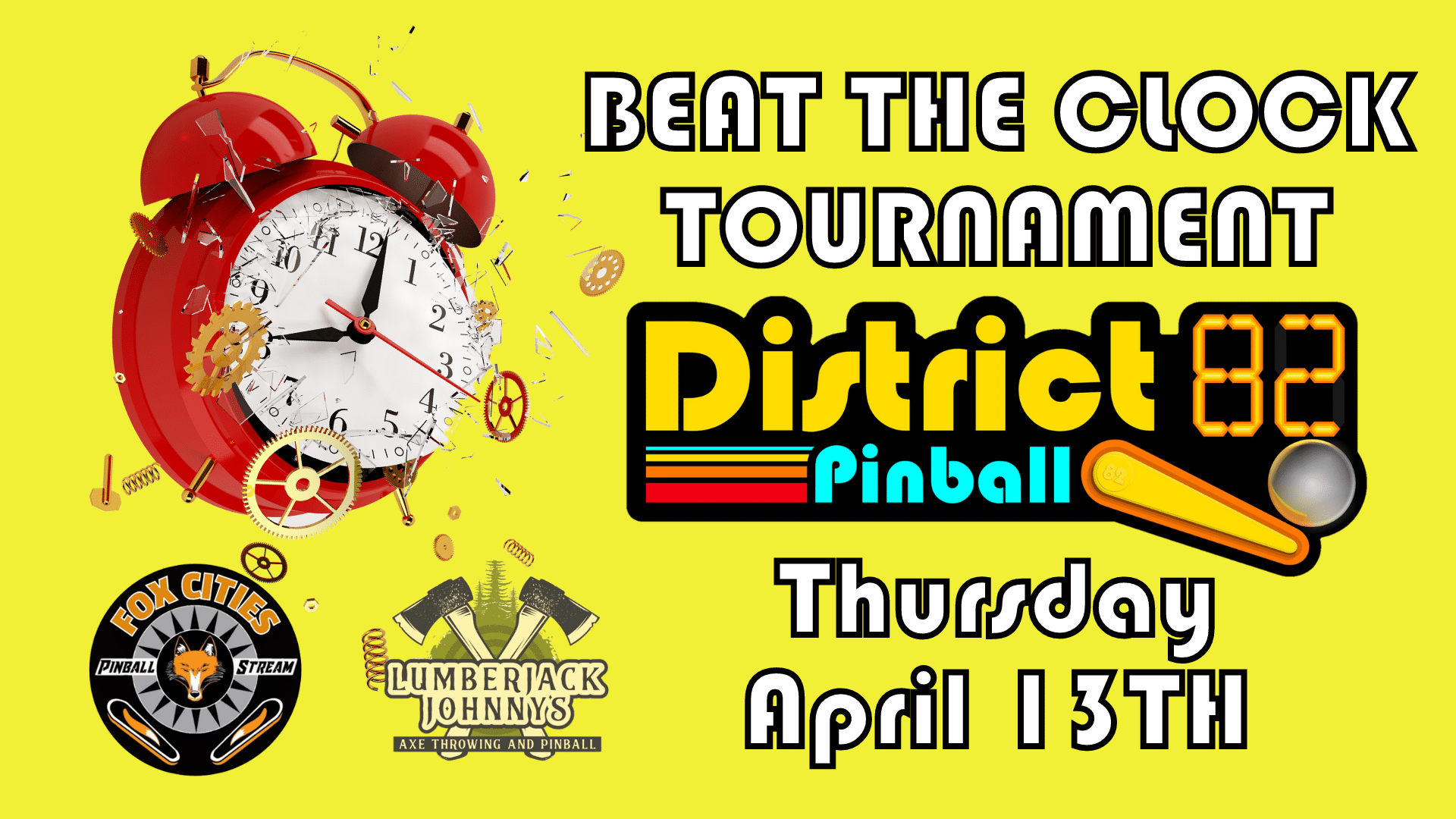 This pinball tournament is separate from the Great Lakes Pinball Open (GLPO) and requires its own registration.

This is considered the ‘Warm Up’ Tournament for the GLPO but you do not need to play in the GLPO to play in the this event. This is a stand alone tournament that starts and ends in 1 night.

This is one of our most popular tournament formats at District 82. This is 5 hours of tournament pinball only using the ‘classic’ machines. Winner with the most points after the final match is completed after the 5 hour mark is the winner.

Beat the Clock Pinball Tournament format. Group Match Play (7/5/3/1) scoring with Swiss Style Seeding. Tournament length will be based on time and not the number of rounds played. Will run from 6PM-11PM. The last round will be whatever round we are on at 11PM and we will complete that round. Also, we are only going to be using the “classic” games at District 82 for this tournament.

Overhead ‘house’ lighting will be off for this tournament.

Thursday April 13th, 2023
4PM Doors Open Practice Starts
6PM Tournament Starts
If you have not checked in by start of tournament and haven’t communicated that you will be late you will be removed from tournament.
Will continue until 11PM and we will finish any round started before 11PM.
Winner is the person with the most points. No Playoff. No Side Tournament.

Limited to 150 people
Cost is $25 per person
Please click on blue register link above or send email to [email protected] if that doesn’t work or if full. Pay when you get here, not in advance.
All games on free play
Bottled water included (if you want something specific to drink you can bring it)
Soda is $1 can
Trophies for top 4, Stern Translite for overall winner too

Bottled Water Sponsored by our friends at Lumberjack Johnny’s

This is a 1 day tournament that will not be combined with anything else and their is no side tournament.
This is going to be group match play style with swiss style seeding. The difference here is that we are going to play only the EM and earlier solid state pins. These are all the faster playing games at District 82 (the B group). Plus, this tournament is going to be based on time and not rounds of play. We will start promptly at 6PM and continue until 11PM. You need to be at District 82 by 5:45PM to check in. Whatever round we are on when 11PM comes we will finish that round and that is the end of the tournament. I would guess we will get in between 13-14 rounds of play.

This is the current list of games (as of Jan 2023) that will be in the Beat the Clock Pinball Tournament. I reserve the right to add in a couple games or take out a couple games. But this list will be very close.

Only Ties for 1st-4th place will be broken with a randomly selected classic game. 1st place would be a significant tie breaker in that whomever wins it also wins the tournament and will be reported to IFPA as a win. Ties for 2nd-4th are not significant and will only be played to determine whom gets the trophy. Ties for 2nd-4th will still be reported to IFPA as a tie.