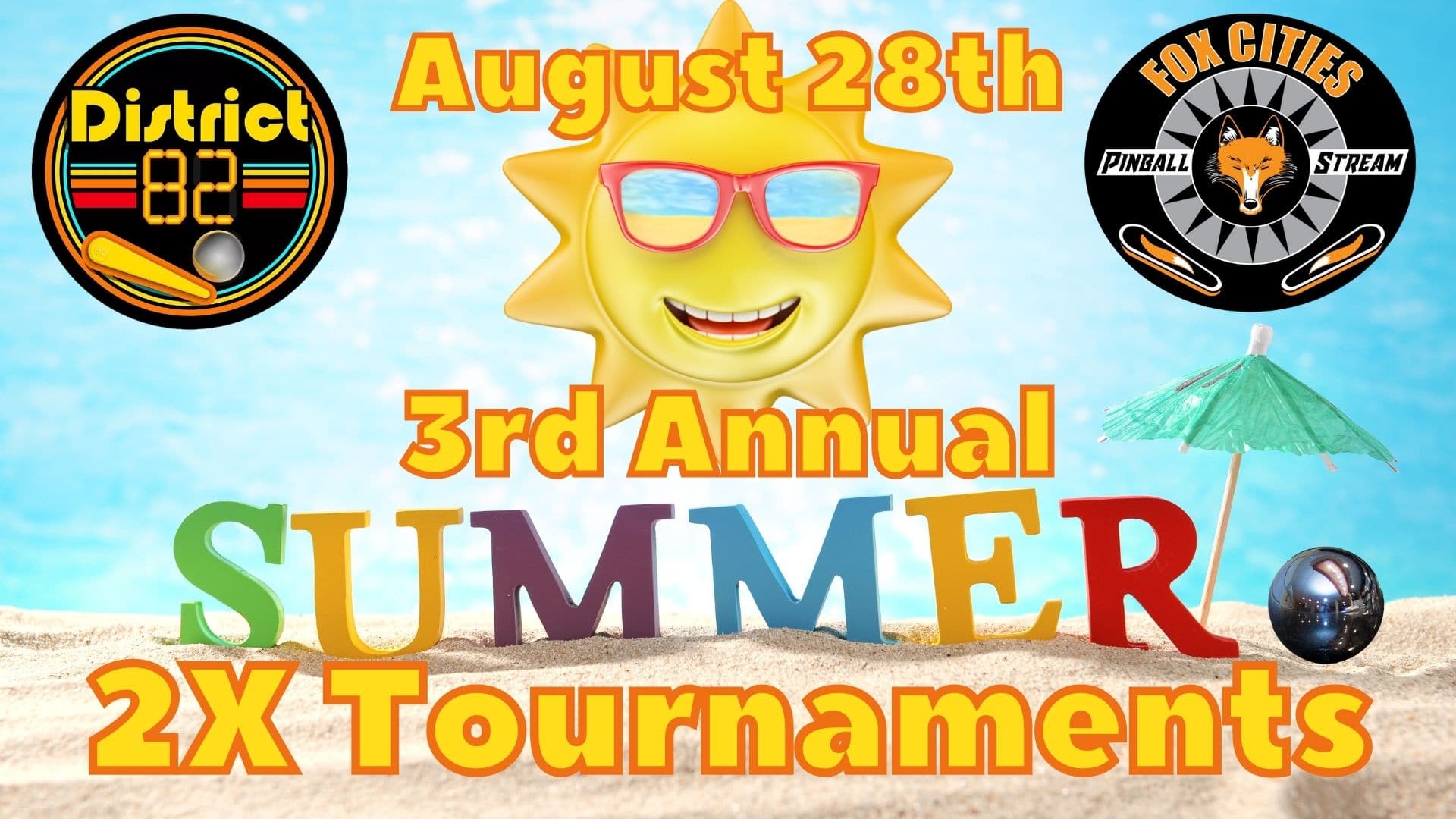 3rd Annual Summer 2x Pinball Tournaments
Saturday August 28, 2021
2 Full Tournament in 1 Day both IFPA approved
Both Tournaments will be live streamed via Twitch by Fox Cities Pinball Stream
NEW PLAYERS WELCOME
13 Round Match Play Tournament Followed by a 4 Strike Knockout Tournament
All 100+ Pinball Machines will be in this tournament and set on free play for you to enjoy. Click here for current game list.
Both Tournaments total cost is $75 per player ($45 Discounted Admission to D82 plus $30 Cash Prize Pool)
Please register for each tournament individually
You can play in only 1 of the 2 tournaments for $40 ($25 Admission to D82 plus $15 Cash Prize Pool)
Register for each tournament separately
Pay for the tournament(s) when you arrive
Yes IFPA approved, Yes WPPR Points, 100% ‘TGP’

Saturday August 28, 2021
Doors open and Practice Starts at 8:00AM
Match Play Tournament Starts at 9:00AM
Knockout Tournament Starts after the conclusion of Match Play Tournament and short break about 4:30PM
Please arrive by 8:45AM to check in
Lunch Break around 12:00–Dinner Break around 7PM–You have time and can leave to get food
If you are just playing in the 2nd tournament please arrive by 4PM to check in and practice.
If you have not checked in by start of tournament and haven’t communicated that you will be late you will be removed from tournament.

Click the blue Register Button or Send email to [email protected] saying you want to register. You pay when you arrive.
2 Tournaments, 2 Separate Registrations
$75 fee includes both tournaments or $40 for either tournament individually–if you only want to be in 1 or the 2 tournaments
If you pay with cash, District 82 will pay the sales tax, if you pay with credit card you will pay the sales tax
All machines are on Free Play so no additional costs, you can play any game you want in-between rounds, during practice & breaks.
We will have designated breaks for lunch and dinner.
Bottled water and soda provided (if you want something specific to drink or eat you can bring it)
District 82 Pays the $1 IFPA Fee per player, per tournament

Trophies for top 5 each tournament

Cash Prizes (You actually get a check) for top 8 in each tournament, prize amount is based on number of players

Income Taxes are responsibility of the winners

The Format will consist of 13 Rounds of Play in groups of 4 players (3 players if necessary).
One game will be played per round per group.
Scoring will be 7-5-3-1/7-4-1
First round will be random seeding.
Subsequent rounds will be seeded using a Tiered Swiss Seeding. Players are grouped into tiers that narrow as the tournament progresses. Later rounds will seed players with similar points accumulated playing each other.
Since the tournament is direct play, there is no playoff. The winner is the player with the most points after all 13 rounds have been completed.
All games will be drawn randomly (but will alternate between DMD and non-DMD games) and should balance out so you’re not playing the same machine over and over again.
Should there be a tie for first place, another game shall be played as a tiebreaker. No other ties will be broken unless its for a trophy or prize.
Top 5 Trophies/Top 8 cash prizes from $15 prize pool

The Knockout tournament will start after the conclusion and awards are given for the Match Play Tournament. I would estimate 4PM start time.
The Knockout Tournament is a 4 Strike Tournament played in groups of 4 (3 when necessary).
Random Seeding to start, then Swiss Style. Games drawn randomly.
Groups of 4 will play against each other on a single machine
The 2 players with the lowest scores in a group will receive a strike (3rd, 4th Place in the match)
3 player matches (as needed) lowest score (3rd Place) will receive a strike.
Once a player has 4 strikes they are out of this tournament
The tournament continues until there is one player remaining. Only ties for trophies will be broken with another game played.
Top 5 trophies, Top 8 cash prizes from $15 prize pool
GAMES DRAWN UPDATE: Starting at 10:00PM all new rounds drawn will be on the older mostly non-DMD pins at District 82. This is the B group at District 82.