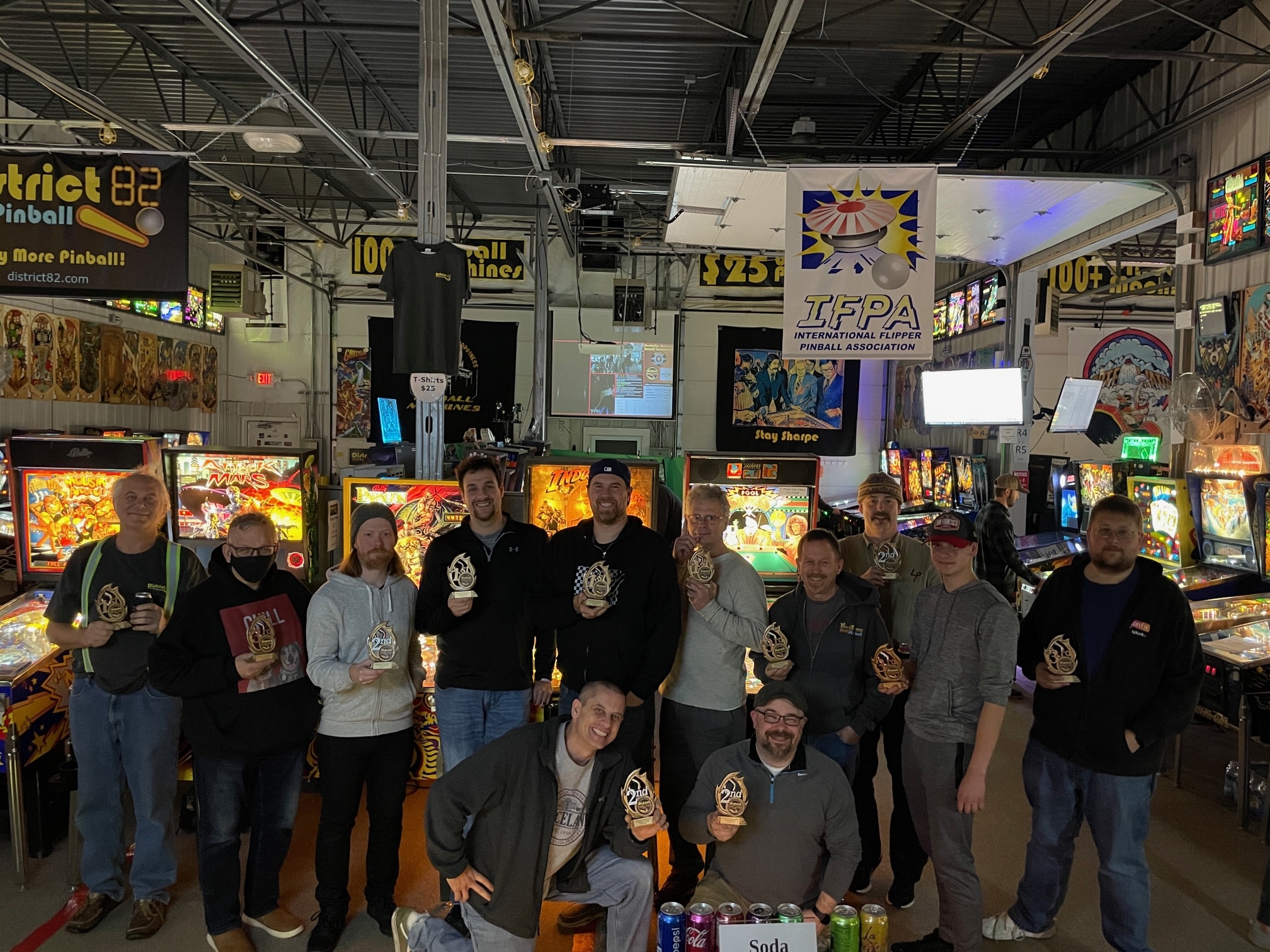 Saturday Dec 11th 2021
11AM-10PM
$35 per player includes both tournaments
8 Round Group Match Play Qualifying
Top 64 players qualify for finals in A/B/C/D divisions with 16 in each division
3 Rounds of Seeded Playoffs with 3 games per round Multi-Match, High Seed gets 1st choice of bank or order
Trophies for top 3 in each division
Cash Prize for winners only of each division

Godzilla Side Tournament is a 1 Game Best Game Qualifier — Yet to be determined
Finals of 3 rounds of 4 games per round; Multi-Match Style; High seed gets 1st choice of bank or order
Each Round top 2 advance and bottom 2 eliminated
After 3rd Round, the Top 2 players advance to a 1 game playoff on Godzilla for the overall win
Both Tournaments will be 100% TGP for IFPA points

Saturday December 11th, 2021
10AM Doors open and side tournament qualifying starts
11AM Main Tournament Qualifying Starts
Qualifying should run until 2:30 PM
Break between qualify and finals will be 1 hour
Playoffs should take 45 minutes per round with 3 rounds to determine winner.
Around 6:30PM Side Tournament Finals should start but will take place right after main tournament concludes
If you have not checked in by start of tournament and haven’t communicated that you will be late you will be removed from tournament.

Limited to 95 people
Their is a button on the website that says “register” if their are still spots remaining. Please use it or if you are having trouble you can send an email to [email protected] saying you want to register and I can manually put you in.

Cash Prize Money for 1st Place Each Division is as Follows:

8 Rounds of Group Match Play. If 64 people or more attend the field will be seeded 1-64 after the end of round 8. If you are not one of the top 64 you don’t move on to finals but can still stay and play games all day. Field is broken up into A,B,C, and D divisions with 16 people in each. You then compete only against the people in your division on up to 9 games. Trophies for Top 3 in each division.

Qualifying will consist of 8 Rounds of play in groups of 4 (3 players if necessary)
Each round will alternate between newer DMD style pins and older EM/Early Solid State pins
One game will be played per round per group
Scoring will be 7-5-3-1 or 7-4-1
All games will be drawn randomly but should balance out so you’re not playing the same machine over and over again.
First round will be random seeding.
Subsequent Rounds are balanced pairings. Players will be randomly paired with previous unfaced opponents.
After 8 rounds the field will be ranked based on your cumulative finishing score from all 8 rounds and divided into groups. Automatic Tiebreakers will be turned on in software so I should get mostly 1st-64th positions. The only exception for Automatic Tiebreakers will be if we have a tie in cumulative points that would divide you between divisions. Example with have a 4 way tie for 15th place. Then a 1 game playoff will take place, drawn randomly, to determine which group and what seed number you are. If we have an odd number of players A group will have 16 players no matter what. B,C,D groups will be equally divided among the remaining players. If we have 50 players. 16 will be in A, 12 in B, 12 in C, and 10 in D, etc.  If we have more than 64 people some people won’t make the playoffs of main tournament but are welcome to stay and play until the end of the tournaments. For IFPA reporting purposes once you are put into a division you cannot advance higher than the best position in your qualifying group for WPPR points and the overall tournament finish. Example—If you are in B division and you win that grouping you will be in 17th place for the whole tournament.

Playoffs will be a group knockout style tournament. None of your points from qualifying will carry over and you will be starting with a clean slate each round. This will be seeded 1-16 using the results from the qualifying round. All machines inside District 82 pinball can be used for the playoffs. They will be pre-selected in banks of 3 games with a mix of eras for each bank. The highest seed in each group gets to either pick the bank of games or player order, then next highest seed gets to pick what’s left; bank of games or player order, then 3rd person, etc until each grouping is set. We let the highest seed in the overall tournament pick the bank of games first, then next highest group picks 2nd, 3rd highest picks 3rd all the way down to the last group. We will have about 25 different 3 game banks to choose from but you cannot pick the same bank twice on any of your playoff rounds. You will play in a group of 4 people playing 3 games in a Multi-Match Format which means all 3 games will be played at the same time. You play them in the same order so Player #1 will go first on all 3 games. Once Player #1 plays the 1st ball on the 1st game and drains they move on to game #2 and play the 1st ball at the same time player #2 steps up and plays their 1st ball on the first game, etc.  You will get 7/5/3/1 scoring on each game based on your finishing position against the 3 other players in your group.

Once the 3 games are completed the scores are added up. The top 2 advance the bottom 2 are eliminated. If there is a tie between 2nd and 3rd a 1 game playoff from the alternate listed on the sheet will be played between the tied people. No other ties will be broken except for the top 3 overall in each division for trophies.

I need the scores of everyone who is eliminated on each round because I will be basing the overall finishing position on what you scored in your group for playoffs. Example: If you get 12 points on your 4 games and someone in the same division and round but different group scores 14 points they will be ranked higher than you for the overall finishing position of the tournament. I don’t want an 8 way tie for 9th.

That’s the whole tournament. All IFPA guidelines regarding player order, stuck balls, machine malfunctions, etc will be followed. Tournament Director has final say on all rulings.

Everyone gets to try and qualify for the tournament but only the top 16 will do a playoff.

Qualifying for this tournament will start at 10:00AM with practice for main tournament. Finals for this tournament will start at the conclusion of awards from the 1st tournament; approximately 6:30PM. This tournament will be a 1 game, best game, qualifier then a 3 round, 12 game multi match playoff for the top 16 players. 1 machines will be set aside before the start of the main Match Play tournament. You will play 1 game on that machine and write down your actual score. There will be a computer and camera over the game so when you finish your game and write your score down you also need to push the giant illuminated blue button next to the game which will do a screen capture of your face and score at the same time. Make sure your score is showing on the computer screen when you push the button. You can qualify for this tournament anytime from 10:00AM to conclusion of the 1st round of playoffs but you only get 1 try. The cutoff time is such that half the field is completely eliminated from the tournament after the 1st round of playoffs and if any one of those eliminated players is top 16 in side tournament qualifying I want them to be able to make a choice if they want to stay for the side tournament finals or just pass it one to the next highest qualifier and they can leave.

Then the top 16 players will do a 13 game multi match play playoff to determine the winner with top 2 advancing and bottom 2 being eliminated with every round of each 4 group set. 4 groups of 4 people each will be bracketed based on qualifying position and play 4 games against each other. These 4 game banks will be played at the same time (multi-matchplay style). You will receive (7/5/3/1) scoring based on how well you do. The top 2 will advance the bottom 2 will be eliminated. Groupings of game banks will be pre-selected. Top seed in each group (based on qualifying game) gets to choose which game bank they want to play or their order 1st, then next highest seed, etc. You cannot pick the same bank of games twice. This is a separate tournament from the main so nothing carries over including what game banks you chose from the 1st tournament. How many points you get in each round do matter. If you get eliminated I will look at how many points you earned vs other people that got eliminated in the same round and rank you based on points earned so we won’t have an 8 way tie for 9th place. We will continue this way until the top 4 remain. The last round of the Top 4 will have a 1st, 2nd, 3rd & 4th players but then the Top 2 players will advance and do a 1 game Final on Godzilla. The player with the highest point total from the final round of qualifying gets to pick order 1st on the final game. Highest Score on Godzilla wins the tournament. If someone qualifies for Top 16 and can’t stay I will take the next person (17th) and put them in the Top 16 for playoffs. The person that left will be put in 17th position for final standings. If someone leaves early after starting the playoffs they will get their ball launched and most likely last place in that grouping. Overall winner receive Godzilla Plaque and Translite. 2nd-4th get D82 Swag.