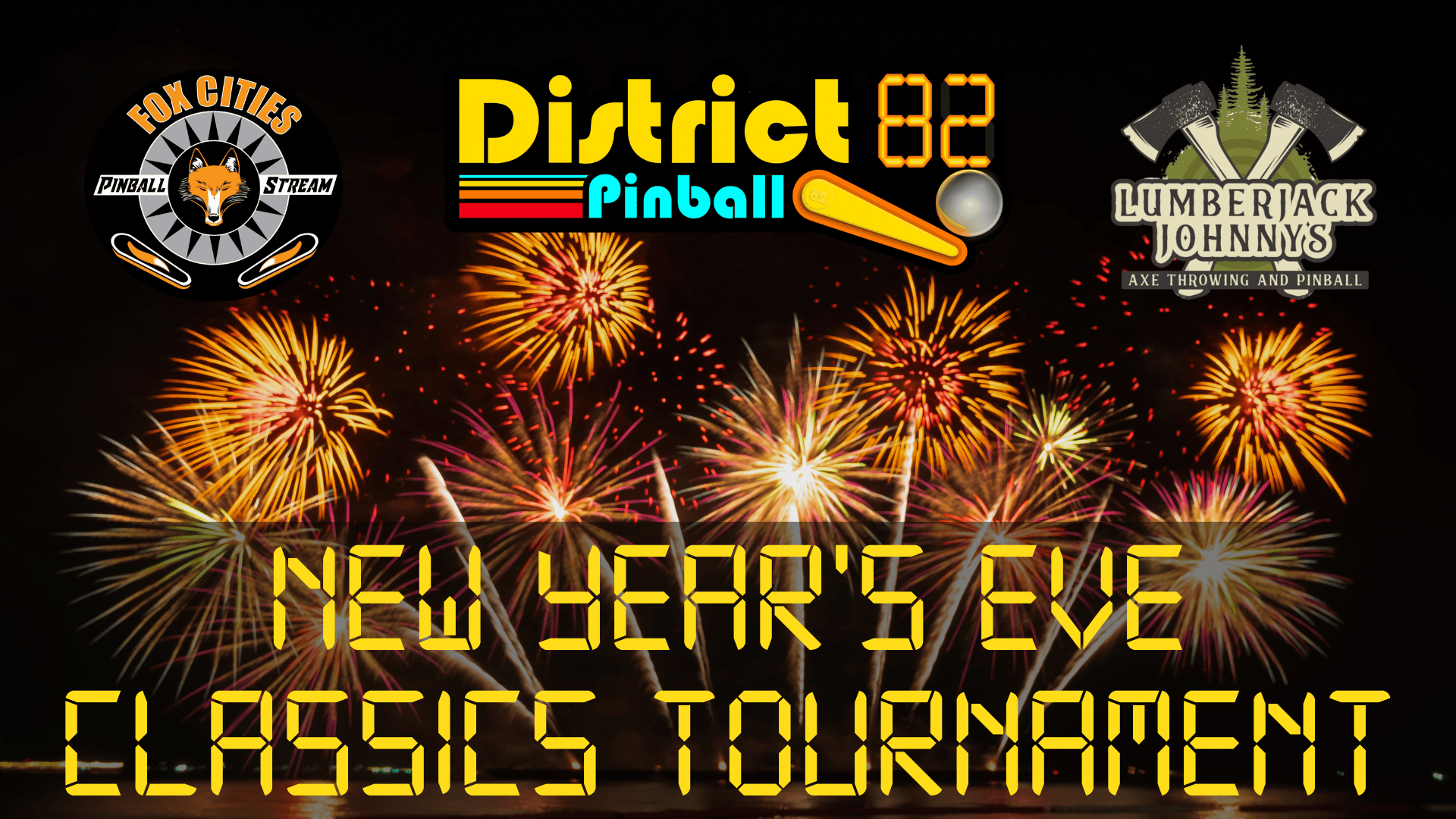 Tournament will start on New Years Eve and run past midnight making it the first pinball tournament of 2023 in Wisconsin!

Open Pinball Tournament is welcome to anyone who wants to play

All Classic Games 1985ish and older

Tournament has a ‘Qualify’ portion of 16 games played in 8 rounds of 2 game banks that everyone plays and a ‘finals’ portion for only the top 16 players from the Qualify portion.

Saturday December 31st, 2022
Tournament will End AFTER midnight and will count as the first tournament for 2023!
11AM Doors Open for Saturday Pinball
5:15PM Tournament Starts – If you are here after 5:15PM You are playing in the tournament!
Top 4 win Trophies
Soda is $1 can
Bottled Water is free
IFPA approved
NEW PLAYERS WELCOME
Group Match Play Tournament on Classic Games
Tournament is Free with paid admission to Saturday Open Pinball
$25 Entry Fee for Saturday Open Pinball includes the cost for the tournament
Please register if you know you are coming but walk ins are welcome to play too.
IFPA approved ‘TGP’ will be 200%

Click the blue Register Button or Send email to [email protected] saying you want to register. We will also accept last minute walk-ins for this tournament but its easier if you register.

District 82 Pays the $1 IFPA Fee per player per tournament

Trophies for top 4
No Cash Prizes
Tournament is IFPA approved

The Group Match Play Qualifier will be played in groups of 4 (3 when necessary).
Random Seeding to start, then Tiered Swiss Style thereafter. If Tiered Swiss not available then Swiss will be used.
Each Round will consist of a 2 game bank played 1 at a time on the older, ‘classic’ games at D82
You will receive 7/5/3/1 scoring on each game
Automatic Tiebreakers will be turned on
Once 8 rounds are played the top 16 players make it to the final
16th place will not use the Automatic Tiebreakers. All players tied with the same amount of accumulated points as the 16th place person will have a 1 BALL tiebreaker to determine who gets into the final and who doesn’t. This 1 BALL tiebreaker is significant and will result in the final placing for all players who finish 17th or worse in the tournament. Example. We have 10 players with the same amount of points who finish from 11th-20 in qualifying. They all get to play a 1 BALL tiebreaker. The person with the lowest tiebreaker score finishes the tournament in 20th place regardless of there qualifying position.

Finals will consist of the top 16 players playing 3 rounds of 3 game banks.
Each Round will consist of 4 players in a group playing 3 games one at time with 4/2/1/0 scoring on each game
Top 2 Players Advance Bottom 2 Eliminated. If we have a tie for 2nd or 3rd in the first or second round another game will be chosen and the affected players will have a tiebreaker on that game with the higher seed having 1st choice of order.
Seeded Players will be placed into a bracket as follows

The 8 eliminated players will be ranked 9th-16th according to the accumulated points in this round. Ties will not be broken.

For the Semifinal Round, the 8 players advancing will be divided into two groups of four. The groups will be organized according to the original qualifying rank as shown here:

The four remaining players advance to the final round. The final round is conducted in the same manner as the Semifinal Round. The total scores for this round will determine the ordering of the winners. All ties in the final round are considered significant and will be broken with a 1 game playoff. Order choice will be given to the higher original seed. The final reporting of points to IFPA will show 1st-4th place with no ties.