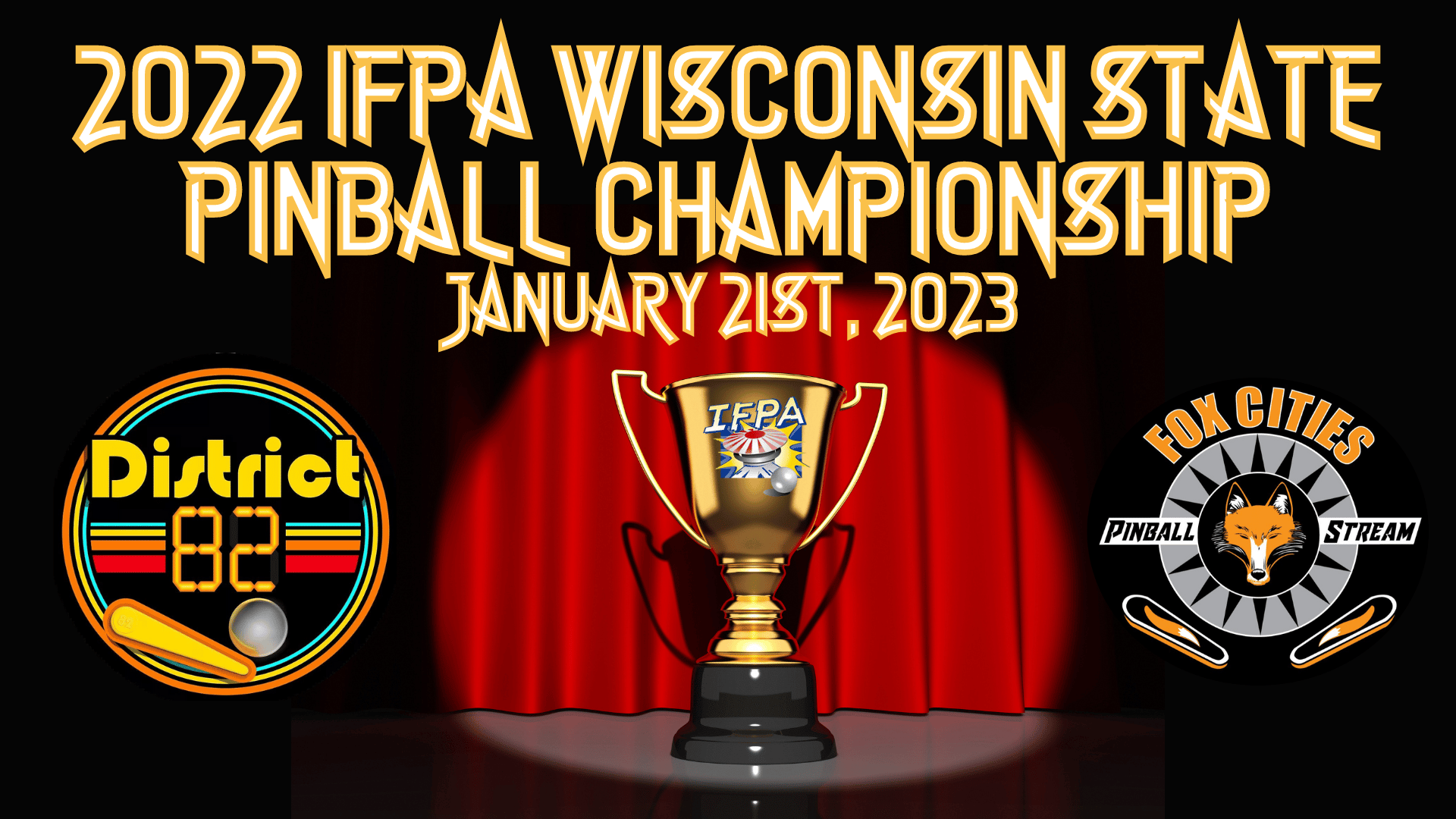 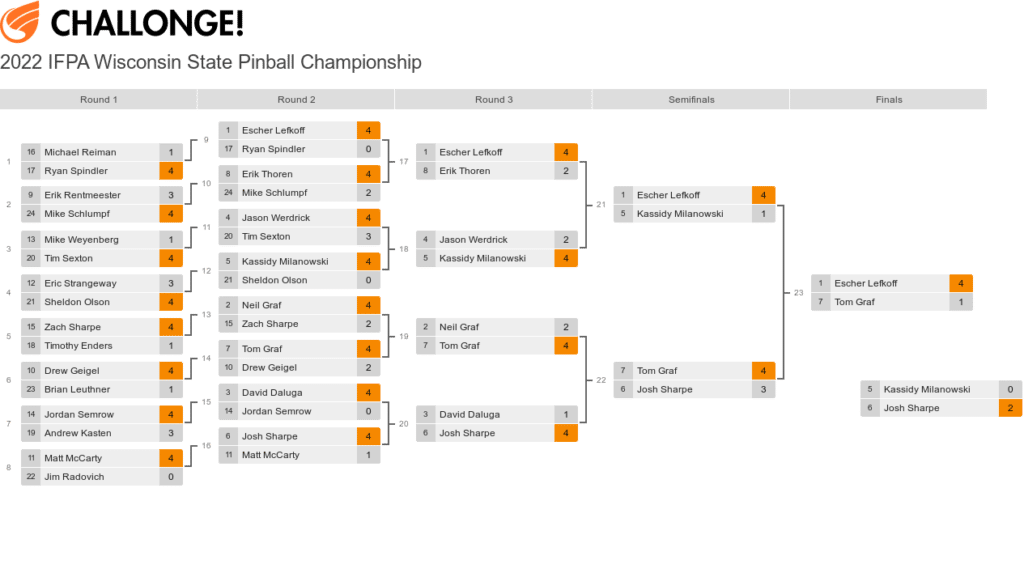 You need to qualify for this tournament. This is not an ‘Open’ Tournament. We will be following the NACS Official Rules (2022) for this event.

Friday Night January 20th, 2023
Open to public for drop in play. We also have a 3 strike knockout starting at 6PM. You do not have to register for this. Just show up if you want to play. $25 per person.

Top 24 Players (Who want to play in this championship) Qualify. You will have until 8PM CST on January 7th, 2023 declare if you are playing in Wisconsin or not. You declare this by contacting Erik Thoren at [email protected] to say you are playing in Wisconsin. You will need to register on the IFPA website to claim your spot in the finals. You will be notified if you are potentially the top 24 via the email address you registered with at the IFPA. You must be registered with the IFPA to play. Here is the current standings list:

Cost will be $25 Per Person to play in this tournament at District 82.

Everything will be on free play. This is your only cost.

Players CAN bring a guest to watch. They cannot play any games.

This is the game list for the 2022 NACS State Championship for Wisconsin. No other games will be added to the games available for play list. I may remove a game if it develops an issue or I find out about an exploit that makes it bad for competition.

From there, these champions will be invited to play for the IFPA North American Pinball Championship, details of which can be found below. Any mentions of the SCS below also apply to the PCS and DCS.

For example, the Illinois State Rankings will be made up of IFPA endorsed tournaments including Pinball Expo’s Flip Out tournament, Chicagoland Pinball League, Gameworks Pinball Tournament of Champions, Illini Pinball League, Gameworks Monthly Pinball Tournament, Pre-Expo Fall Classic, etc. Those 16 (or 24) players that earn the most WPPR points based only on these subset of events, will qualify for the IFPA Illinois State Championship. Similar to the World Pinball Player Rankings, only a player’s best 20 events within that state will count towards their standing.

It is the player’s responsibility to make sure they have an email address on file with the IFPA, or they run the risk of not being contacted for participation in any State Championships they are qualified for. Please fill out an IFPA profile to ensure we have a way to contact you. If you see a green check within your profile information on your IFPA profile page, it means we do have a registered email address on file for you.

An endorsement fee of $1 per player, per event will now be required for events to be endorsed by the IFPA and award WPPR points within the United States, Canada and Washington D.C.

Tournament Directors are responsible for submitting payment to IFPA after results are approved. WPPR points will not be posted until payment has been received by the IFPA.

Once all participants are finalized, the 16 or 24 players will be seeded based on their State rankings position at the end of the calendar year. In the event that any players are tied with the same amount of In-State WPPR points, we will look at the overall WPPR rank of those players as of the end of that calendar year. Any players tied on the qualifying bubble with the same State ranking position will result in a play-in tiebreaker game to determine who joins the field of finalists for the State Championship. Game and position will be pulled at random by the TD.

We have a lot of pinball machines. The game list has not been chosen for the finals yet but it will be a lot of machines. I will have a list of “tournament games” that will be used for the tournament. These games can only be practiced on from 8AM-9AM on Saturday January 21st. I will also have a list of Non-Tournament Games. You can play these whenever you want.

Players will be placed in a single elimination bracket once the seedings have been completed.

First round pairings are as follows:

Second round pairings are as follows:

Third round pairings are as follows:

Fourth round pairing are as follows:

Each match will be a best-of-seven. The higher seeded player will have choice of machine or position for the 1st game, with the loser of each subsequent game having choice of machine or order, until someone has won 4 games. A machine may not be played more than once in the same match unless there are less than 7 machines available. If that is the case, only after all machines have been chosen can either player select that game to be played for a second time within the same match. Once a player verbally announces their game choice, or chooses position, that decision will be locked in and cannot be changed.

Each player will have the opportunity for 30 seconds of practice time before starting every game of every match. This is to ensure that both players have a chance to get familiar with the machine.

The winner of the match advances to the next round, while the loser is eliminated.

The 3rd/4th place Consolation Final will be played as a best-of-three instead of a best-of-seven like all other rounds, using the same rules. It is up to the IFPA State Representative as to whether matches will be played out to determine 5th through 16th (or 24th) place.

For any state that is eligible for the expanded field of 24 finalists, the top 8 players will receive a bye, with the 9th through 24th seeds playing in an opening round. The rest of the bracket will play out as above.

Winners will receive cash prizes as cash or check during an awards ceremony shortly following the conclusion of all final rounds. Winners need not be present to receive prizes; prizes will be supplied via postal mail if necessary. All taxes are the sole responsibility of winners. Certain tax forms may need to be completed, as directed by tournament officials. All decisions by tournament officials regarding winners and prizes are final.

Any state with 16 finalists will have the following payout structure:

Any state with 24 finalists will have the following payout structure:

All rulings and malfunctions will be based on the rules for the IFPA/PAPA unified ruleset, available HERE.

The IFPA North American Pinball Championship will be held on March 9th, 2023 at District 82 Pinball. Additional details on the format and prizes is available HERE.